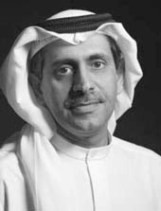 Khalid Albudoor is the forefront of the modern poetry movement in Dubai, where he was born, and has published five poetry collections.

He is a founding member of the Emirati Writers’ Union, and an active participant in readings and festivals in the UAE and abroad, with a BA in Mass Communications from the University of the Emirates and an MA in Script-Writing from Ohio University, USA. He won the Al-Khal Prize for Poetry in Lebanon in 1991.

A long-time radio and television scriptwriter, presenter and producer, and former director of Radio Dubai, he is currently researching UAE history and cultural heritage.

At the 2010 Emirates Airline Festival of Literature, Khalid launched an anthology of Emirati poetry from the 19th and 20th Centuries, translated into English by Fadhil al-Azzawi. Later that year he participated in the UK’s Ledbury Poetry Festival and the London Literature Festival in events supported by Banipal and the Emirates Foundation.