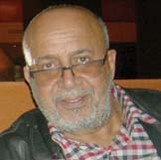 Mohammed al-Asfar is a Libyan novelist who began writing in 1999. He has ten published novels, among them Al-Mudassa (Guided by a Star) and Farha, and two collections of short stories, Rashid’s Stone (Rosetta Stone) and (The Dice). Most of his books are published outside Libya.