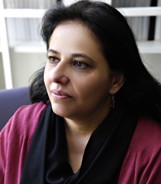 is Associate Professor of English and Creative Writing at in   She is the author of Letters from Cairo, a travel memoir, (Syracuse University Press, 2007), Egyptian Compass, a collection of poetry, (Custom Words, 2006), and the co-editor of Dinarzad's Children: An Anthology of Contemporary Arab American Fiction (, 2009).  Her new collection of short stories, The Time Between Places, is forthcoming from the (fall 2010). She is author of Egyptian Compass and Letters from Cairo. Her work has appeared in a variety of journals and anthologies, including Mizna, Phoebe, Borderlands, The Poetry of Arab Women, Post-Gibran: Anthology of New Arab American Writing, Cultural Activisms, and The Space Between Our Footsteps.  She received her Ph.D. from .  Kaldas was born in and immigrated with her parents to the at the age of eight in 1969.