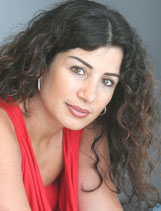 was born in 1970 in Beirut, Lebanon, where she lives and works. A poet and translator, and speaking seven languages, Joumana is chief editor of the cultural pages of the Lebanese daily An-Nahar, for whom she has interviewed many international writers such as Umberto Eco, Wole Soyinka, and Paul Auster. In April 2006 she was awarded the Arab Press Prize in Dubai for her interview with Mario Vargas Llosa. She has five collections of poetry, including Return to Lilith (translated and published in Banipal No 24, Autumn/Winter 2005). She has translated several works of poetry and prose into and from Arabic with selected poems of her own translated into several European languages. Selected poems can be found on her website www.joumanahaddad.com.

Joumana is one of four authors touring the UK with Banipal Live 2006. We take this occasion to republish from Banipal 19, Five Poems translated by Khalid Mattawa. Unbuttoning the Violin, selected works by the two poets and two fiction writers on the tour, contains many more poems by Joumana translated by Issa Boullata (from Arabic) and Marilyn Hacker (from French).