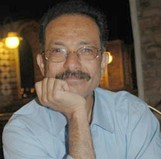 was born in Taiz, north . He started writing at the age of 18 and soon gained a controversial reputation. He became a sought-after cultural editor for mainly progressive and oppositional publications. His first novel, excerpted above, Taste Black . . . Smell Black was published in 2008 to high acclaim.