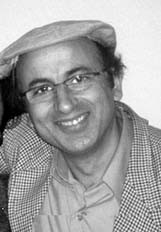 was born in the small village of Marmarita, Syria, in 1959. He studied in the Soviet Union for a year and after that lived in Holland, Belgium, Switzerland, and Germany before returning to Syria. Later he stayed in London for five years. Still with wanderlust, he will soon travel to the USA. He has three books in Arabic, set in Germany, Russia and, excerpted above, the UK.