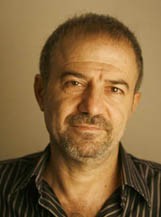 Hussein Bin Hamza was born in Al-Hassaka, Syria, in 1963. Since 1995 he has lived and worked in Beirut. He has worked as a journalist on cultural affairs for several newspapers, such as An-Nahar, As-Safir, Al-Balad, and now he works for Al-Akhbar. He has several collections of poetry. Selected poems are published in Banipal 33.