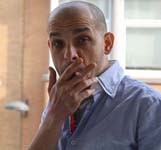 was born in Al-Farouniya village in the Egyptian Delta in 1974. He studied journalism at Cairo University and continues his studies at Gent University, Belgium. He has published two collections of poetry, with several translations into Dutch, French, and English. He writes for several Arab newspapers and magazines.