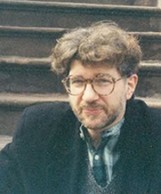 is a poet, translator, critic and scholar. He teaches at Queens College, New York, and is former chair of Classical, Middle Eastern & Asian Languages & Cultures; he is on the Medieval Studies and Comparative Literature faculty at the CUNY Graduate Centre. He has been a regular contributor to the Village Voice Literary Supplement and his poetry, prose, reviews, critical articles, editorials and translations have appeared in many other US publications.