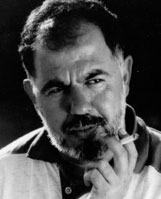 Hashem Gharaibeh was born in the city of Hawara near Irbid, Jordan. He received his first Bachelors in Dentistry Labs from Baghdad, Iraq in 1974 and a second Bachelors in Business and Economics from Yarmouk University in Irbid, Jordan in 1990. He is a member of the Jordanian Writers Society and served on its Executive Board for two terms, occupying the position of Vice President from 1992 to 1994. He also served as Irbid Municipality’s Chief Cultural Officer and the Chair of Irbid Festival as the City of Culture for 2007.

Gharaibeh is a member the Socialist Thought Forum. He was imprisoned in Jordan between 1977 and 1985 for his political views and membership in the Jordanian Communist Party. Many of his stories, plays, and novels reflect his prison experience. His stories include, Homoum Saghera (Small Worries), published by the Jordanian Writers Society in 1980, Gessas Oula (First Stories) by Dar al-Ofouq in 1984, Galb al-Madina (The Heart of the City) by Dar Godsieh in 1992, al-‘Hayat Ebra Thoqoub al-Khazan (Life Through the Holes in the Water Tank) by al-Kandi in 1995 and Adwa al-Kalam (The Contagiousness of Talking) by al-Mouasasa al-Arabiya le-al-Derasat in 2000.

Gharaibeh also wrote children stories among them Ghorab Abyad “A White Crow” by Dar al-Helal, 1996, Ghozlan al-Nada (The Deer of the Dew) by Amman Municipality in 2000. He also wrote numerous plays and scripts for radio and television.

In addition to his essays and articles in national and regional newspapers, Gharaibeh served as the chief editor of al-Mahata al-Thagafieh (1995-1998), and Baraeem Amman published by the Amman Municipality (1998-2000). He received a number of awards including the Jordanian Writer Society’s Mahmoud Saif a-Deen al-Irani’s award for short stories in 1990, Arab Pioneer’s Shield for his literary contribution from the Arab League in 2000, and Nazal Award from the Amman Municipality in 2008.