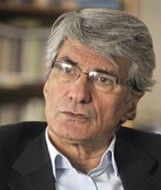 Jawdat Fakhreddine was born in 1953 in southern Lebanon. He has published more than ten collections of poetry, the first in 1979. Some of these collections are: Awham Rifiyya (Rural Illusion, 1980), Manaraton lil Ghariq (A Beacon for the Drowning, 1996), and Samawat (Skies, 2002). He is professor of Arabic literature and criticism at the Lebanese University, Beirut and was a visiting professor at Indiana University, Bloomington, Indiana, in the academic year 2007-2008.

He has published reviews and studies in a number of newspapers and journals in Lebanon and the Arab world. Some of his poems have been translated into English, French and German. English translations have been published also in the Marlboro Review (USA).