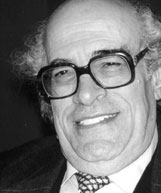 is from Alexandria, Egypt. He published his first and highly acclaimed collection of short stories, Hitan Aliya (High Walls), in 1959, but then stopped writing during the years that followed when many of his contemporaries were in prison, and instead immersed himself in translating literature and writing criticism.

Twenty years later his first novel Ramah wal Tinneen (Ramah and the Dragon) was published. Now considered a classic, it is, according to the author “untranslatable”. It brings together the different worlds of poetry, legend, philosophy and history in the tales of Ramah and the dragon, where the tales stand alone yet interlocked with each other through the middle-aged protagonists Mikhail, a Copt, and his lover, Ramah, a Muslim woman. In 2003 an English translation by Ferial Ghazoul and John Verlenden was published (AUC Press). In 1989 his fourth novel City of Saffron was published in English (Quartet Books), followed by its sequel Girls of Alexandria in 1993 (also Quartet Books). The Stones of Bobello, a volume of memoirs, was translated as part of the Mémoires de la Mediterranée project that translated and published autobiographical novels by Arab authors in European languages. Al-Kharrat read from his works at the 1999 London Festival of Literature, The Word. An interview with him appears in Banipal No 6, Autumn 1999.