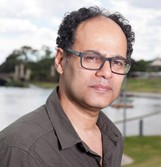 Jamal Mahjoub is an award winning writer of mixed British/Sudanese heritage, born in London in 1960. He was raised in Khartoum where the family remained until 1990. He went back to the UK after being awarded a scholarship to Atlantic College in Wales, and then going on to study Geology at Sheffield University. He returned briefly to the Sudan in search of employment after which he decided to dedicate himself to writing.

Since then Mahjoub has lived in a number of places, including London, Denmark and currently Spain. He has worked in a variety of sectors to support his writing, including telemarketing, catering and futon making and has also worked as a librarian, freelance journalist and translator from Arabic, Danish and Catalan.

His work has been translated into French, Spanish, German, Italian, Dutch and Turkish. Travelling With Djinns (Chatto & Windus 2003) won the Prix de l’Astrolabe award at the Etonnants Voyageurs Festival in France in 2004. The Cartographer’s Angel won the Heinemann/Guardian African Short Story Prize in 1993. The short story The Obituary Tango was shortlisted for the Caine Prize 2005. His novel, The Drift Latitudes (Chatto & Windus) was published in 2006. Nubian Tango was published in French in 2006, and an Kindle English edition in 2012.

He has three novels set in Cairo, written under the penname Parker Bilal, The Ghost Runner, Dogstar Rising and The Golden Scales, all published by Bloomsbury.

For more, go to www.jamalmahjoub.com.