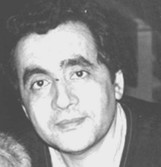 Habib Tengour, poet and anthropologist, was born in Mostaganem, west Algeria, in 1947.  He is considered one of the Maghreb’s most forceful and visionary poetic voices of the post-colonial era.

In 1976 he published his first and surrealist poetic work, Tapapakitaques ou la poésie-île. As well as publishing in literary journals and poetry anthologies, he has also published many collections of poems, novels and poetic texts. His works, including the “Manifesto of Maghrebian Surrealism” of 1981, explore the Algerian cultural space in all its ramifications — the oral & hagiographic traditions, the popular imagination & the founding myths, collective memory, raï music & the lived experiences of exile — and to date encompass some eight books of prose & fifteen collections of poetry.

He also translates to French from English (Pierre Joris) and from Arabic (works of Saadi Youssef and Chawki Abdelamir. He co-edited the anthology Poems for the Millennium, volume 4: The University of California Book of North African Literature, in collaboration with Pierre Joris.

He taught at universities in Constantine & Paris, where he now lives.

Banipal 14 – excerpts from The Old Man of the Mountain, translated by Pierre Joris with profile of the author

Banipal 37 for an excerpt from the epic poem This Particular Tartar, translated by Marilyn Hacker.