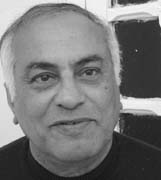 was born in Nasiriyah in southern Iraq. He is “a fine arts major who embraced belle letters, a fiction writer almost equally devoted to poetry, a civil servant who forced himself into early retirement, a writer who regularly reviewed fellow writers’ works, and a columnist and editor who renewed his contacts with Arab readers on weekly and monthly bases, not just in one book after another. His literary output and journalistic career span dozens of countries, cultures, and languages from the Far East to Western Europe and the Americas. His acclaimed novel Al-Washm [The Tattoo], excerpted in Banipal No 17, has been reprinted six times in Morocco but was never published in Saddam’s Iraq. He has more than 12 collections of short stories, six novels, another six volumes of poetry, several books in literary criticism, and at least one autobiographical volume.