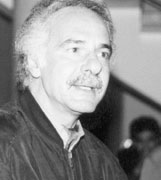 was born in 1942 in Fes, Morocco. He is a poet, essayist, playwright and author of children’s books. In 1966, he founded the avant-garde literary and artistic journal Souffles, which helped spark a literary and artistic renaissance through North Africa. It published 22 issues in French, and eight in Arabic. Sentenced in 1973 to ten years imprisonment for his political beliefs and his writings he was released in 1980 after an international campaign. Since 1985 he has lived in Paris. He has published 14 collections of poetry, four novels, a collection of plays for theatre, three children’s books, ten collections of essays and profiles of artists, and numerous translations of poetry from Arabic to French. His novel Le Chemin des ordalies, is published in English under the title Rue du retour (Readers International, 1989, ISBN 0-930523-62-2). He was awarded the Fonlon Nichols Prize by the African Literature Association and the Wallonie-Bruxelles poetry prize in 1999, the Albert Droin Prize from the Société des Gens de Lettres de France, the Freedom Prize from French Pen, 1981,and in 2002 the Prize of Mediterranean Africa of ADELF. Gallimard will publish his latest book, a novel, in 2006.