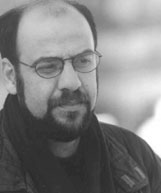 was born in Beirut in 1963. He is a poet, and journalist with As-Safir newspaper. He has published five collections of poetry and a book of essays, also selected poems in French translation. He has translated several works of poetry and fiction, including poems of Octavio Paz, Jack Spicer, 55 Haiko poems about War: Poets from Croatia, and works of Joseph Conrad, José Sarney, Afghani author Atiq Rahimi and Chilean author Luis Sepulveda, and Antonio Tabucchi on Fernando Pessoa. He writes in Arabic and French.