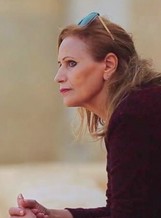 Emna Rmili is a Tunisian writer and researcher, and is a professor of literature and criticism at the Faculty of Letters and Human Sciences in Sousse.

Her works include three collections of short stories and five novels, in addition to her academic research and other writings on political, intellectual and progressive issues. She has one poetry collection, I love you, oh you!, written in Tunisian Arabic.

At the end of November 2020 her house, in the city of Sfax, was attacked by unidentified persons, who entered, seizing some items and burning them. The attack was attributed to takfiri groups who objected to “the writer’s bold ideas and stances calling for freedom of expression, change and women’s liberation”. The attack drew condemnation and outrage among Tunisian and Arab intellectuals. Her latest novel, Beach of Souls, is excerpted above.

Her novel Shatt al-Arwah (Beach of Souls) is excerpted and reviewed in Banipal 73.