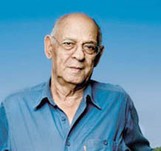 Sami Michael was born Saleh Kemal Menashe Eliahu to a Jewish family in Baghdad, Iraq, in 1926. As a young teenager in the early 1940s, Michael became involved in Communist organizing in Iraq and began writing and translating for political journals.

In 1948, Michael fled Iraq after being sentenced to death in absentia by the government as a result of his activism. He travelled first to Iran and later to Israel in 1949, settling in Haifa. There, Michael wrote for the Israeli Communist Party’s (ICP) Arabic-language journals Al-Ittihad and Al-Jadid under the pseudonym Samir Marid (meaning, “Samir, a rebel”). He has often noted that on his arrival in Israel, at the age of 23, in 1949, he did not speak any Hebrew.

Michael’s articles and stories appeared alongside the works of other Iraqi-Jewish writers, such as David Semah, Shimon Ballas, and Sasson Somekh, as well as prominent Palestinian men of letters including Emile Habibi, Tawfiq Ziad, Jabra Nicola, and Emile Touma.

Banipal 72 – Iraqi Jewish Writers (2021) includes Sami Michael's 1952 short story "Blessed Is the Lord" ("Tabarak al-Rabb"), translated from the Arabic by Ryan Zohar. The primary audience for this story, written originally in Arabic, in addition to Palestinians in Israel, was likely Arabic-speaking Jews in the maʿabarot (transit camps) who would have been familiar with the abuse Ezra faced at the hands of what was, at that time, a largely Ashkenazi police force. While many of these Jews were likely not Yemenis themselves, they would have recognized that the Middle Eastern background of the narrator played a role in the way he was treated by the Haifa police.

The fact that Michael chose to write about a Yemeni protagonist also merits discussion. Michael did not only write about Iraqi Jews in Israel, but also Egyptian, Moroccan, and Yemeni Jews. This choice both emphasizes the way oppression transcended country of origin and could only be conquered by shared struggle, and highlights the challenges faced in Israel by Yemenis in particular.

The writings of Sami Michael and others affiliated with Al-Ittihad and Al-Jadid both highlight the material conditions of oppression in Israel/Palestine and forge Palestinian-Jewish, as well as global, solidarities. Their stories, Tabarak al-Rabb among them, have much to offer our current times.

• The complete version of this essay, in which Ryan Zohar introduces readers to Sami Michael, and two short stories, "Blessed Is the Lord" (translated by Ryan Zohar from Arabic into English) and "Two Women" (translated from the Arabic by Hana Morgenstern), are published in Banipal 72 – Iraqi Jewish Writers (2021)