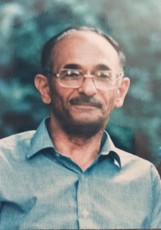 Born in Baghdad in 1933, David Semah studied in the bilingual Jewish school Shammash, which offered excellent Arabic and English instruction. Like his high-school friend, Sasson Somekh, Semah had showed a great interest in Arabic literature at an early age. He was not politically active, but wrote a poem in honor of Iraqi martyrs who were killed in a series of grassroots demonstrations against the state in the winter of 1948, known as the Wathba. During the years 1949-1950 Semah’s family found itself trapped in the situation which affected the lives of many Iraqi Jews. Rightwing elements in Iraqi society identified every Iraqi Jew as a Zionist, while the state of Israel pushed for their migration. The family had no choice but to migrate. Semah took with him one item to Israel – the diwan of the Iraqi poet Muhammad Mahdi al-Jawahiri, which was given to him by his Shi’i high-school teacher. Semah found himself in Israel, together with 124,000 Iraqi Jews who arrived to Israel with virtually no money, living in great poverty and suffering discrimination.

In response to these conditions, Semah, like other Iraqi Jewish intellectuals and activists, joined the Israeli communist party, MAKI. The party was an Arab-Jewish organization and a prominent cultural hub, which counted many Palestinian writers and poets, such as Emile Habibi and the young Mahmoud Darwish, among its members. Somekh and Semah read Habibi’s writings on Marxist literature with great interest and very much identified with what he wrote. The two addressed the literary journal of the party, al-Jadid, asking for permission to establish a club associated with al-Jadid that would bring them closer to Arabic literature. Al-Jadid’s editorial board responded to this call: Jabra Nicola, the editor, and Sami Michael came from Haifa and held a meeting in Semah’s home with Somekh, Ballas, and other Iraqi Jews. Ballas, Somekh, and Semah also decided to publish in al-Jadid and invited more Iraqis to do so; they found in al-Jadid a home. Al-Jadid, for example, published Semah’s poem, “al-Wathba al-ula” (“The First Wathba”) in which the speaker yearned for a second Wathba, and more broadly, for a revolution.

Semah wrote poetry all throughout the 1950s and 1960s, and participated in the literary activities of al-Jadid and in the “Forum of the Supporters of the Arabic Literature” in Tel-Aviv which he co-founded with Somekh and Ballas. In 1959, he published, in the party’s press, his diwan, Until the Spring Comes (hatta yaji’ al-rabi’). Semah then completed an undergraduate degree at the Hebrew University (majoring in Arabic literature), and in the mid1960s was sent by the University of Haifa to Oxford University. Semah’s thesis was later published by Brill; it was the masterful Four Arabic Literary Critics, which analyzed the literary criticism of ‘Abbas Mahmud al-‘Aqqad, Muhammad Hussayn Haykal, Taha Hussein, and Muhammad Mandur. After his return to Israel, he became a professor of Arabic literature at Haifa University where he wrote extensively on Arabic literature, mainly in Arabic, English and Hebrew, until his death in 1997.