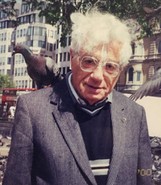 Ishaq Bar-Moshe (1927–2003) Ishaq Bar-Moshe was born and. raised in Baghdad. He was educated at the Rachel Shimon elementary school, Rusafa middle school and completed high school at the Ahliya Jewish school. From 1945–48 he studied at the Law College.

He worked as an editor at a number of newspapers including al-Shaab and al-Ahali. After being forced to emigrate in 1950, he left Iraq for Israel, where he founded the Jerusalem-based newspaper al-Anba‘a. Ishaq died of heart disease in Manchester on December 9, 2003.

His first collection of short stories was Wara al-Sur (Behind the Walls), followed in 1974 by al-Dibb al-Qutbi wa-Qisas Ukhra (The Polar Bear and Other Stories) and Raqsat al-Matar wa-Qisas Ukhra (Rain Dance and Other Stories). The first part of his memoir, al-Khuruj min ‘Iraq (Exodus from Iraq) appeared in 1975, followed in 1988 by the novels Ayyam al-Iraq (Iraqi Days) and Bayt fi Baghdad (A House in Baghdad).