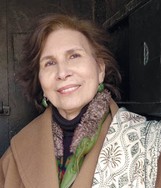 Alia Mamdouh is an Iraqi writer and novelist, born in 1944. She studied Psychology and graduated from Mustansiriyah University, Baghdad, in 1971.

She edited the weekly Baghdad newspaper Al-Rasid, before leaving Baghdad in 1982.

She has been writing fiction since 1973, first a short story collection entitled Overture for Laughter and this was followed by eight novels, some translated into English, French, Italian and Spanish. Her best known novel is Naphtalene (1986), irst published in English translation in the UK under the title Mothballs (Garnet, 1996), and translated into eight other languages and taught to students at the Sorbonne University for two years.