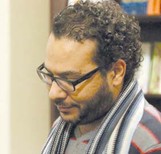 Ahmad Abdulatif (b.1978) is a novelist, translator, journalist, and researcher from Cairo.

He has published six novels: The Keymaker (2010), winner of the State Incentive Award for Literature; The Book of the Sculptor (2013), which won first prize in the 2015 Sawiris Award for best novel by an emerging writer; Elias (2014), a critically acclaimed work hailed as “a novel which lays the foundations of a new Arabic prose” and excerpted in Banipal 66 (Autumn/Winter 2019); Fortress of Dust (2017), longlisted for the 2018 International Prize for Arabic Fiction and translated into Spanish; and Legs That Know Unprompted When To Leave (2019).

Numerous critical studies have discussed Abdulatif’s work, including Amani Fouad’s The Novel and Society and The Anti-Novel by Dr. Mohammed Mishbal.