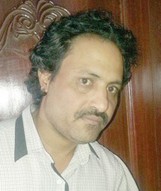 Lutf al-Sarary is an editor and short story writer, whose collection Please Stop the Bombing, was shortlisted for the inaugural Kuwaiti Al-Multaqa Prize for Arabic Short Stories in 2016. He was born on January 29, 1975 in the district of Mawiya in Taiz province, central Yemen. He studied in the village school until eighth grade, when, drawn by an urge to explore city life, he migrated to the city of Ibb. There he went to school by day and worked in a garage repairing car radiators by night. He was forced to return to his village two years later under pressure from his religiously conservative uncle, where he finished the two remaining years of high school in the same school, and then completed his military service as a teacher at the same school.

In 1994, he joined the University of Taiz Faculty of Education to study English. Two years later he was employed by the university administration, staying there after graduation and holding various positions such as head of cultural activity for eight years, then head of student services for four years.

In March 2009, he published his first collection of short stories titled Like Someone Smoking a Long Cigarette in One Puff with Dar Junun in Cairo. Later in the same year, he was invited to edit the culture page of the weekly magazine Hadith al-madina (Talk of the Town), which had just been launched in Taiz city. Two months later, he was appointed Editor-in-Chief of the magazine, where he remained until December 2010.

In late December 2010, he moved to Sana’a to work as an editor in the newly-founded daily newspaper al-Ula. He became the newspaper’s editor-in-chief two months later until the newspaper ceased publication in May 2015 due to the war in Yemen.

In March 2016, he published his second collection of short stories titled Please Stop Bombing with the same publisher, which was now renamed Arwiqa. This collection was shortlisted by the Kuwait-based Al-Multaqa Arabic Short Stories Prize the same year, the prize’s first year.

In February 2017, because of the ongoing war and the deteriorating living conditions that accompanied it, he left Sana’a and returned to his village in the countryside of Taiz province.