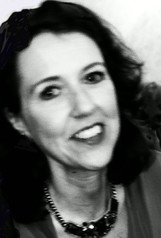 Georgia de Chamberet is an editor and translator with thirty years of experience in independent publishing. She founded BookBlast® Ltd in 1997 and the first bookblast.com website went live in 2000. A founder-member of English PEN's Writers in Translation committee, she kicked off the BookBlast® Celebrates Independent Publishing promotion via online journal The BookBlast® Diary in February 2016.

She is the literary executor of the historian and traveller, Lesley Blanch (1904-2007), whose memoirs she edited. On the Wilder Shores of Love: A Bohemian Life were published posthumously by Virago in 2015; and a collection of early journalism and biographical essays, Far To Go and Many To Love: People and Places, was published last year by Quartet.

Her journalism has appeared in The Guardian, The Independent, Prospect, The Lady, the TLS, Book Brunch, Booktrust, Banipal, 3ammagazine.com and wordswithoutborders.org.

She was a judge on the 2018 Saif Ghobash Banipal Prize for Arabic Literary Translation, and is an occasional reviewer of books for Banipal magazine.