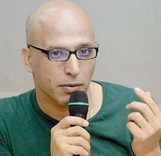 Ahmed Salah Eldein is an Egyptian writer and translator of Russian to Arabic born in Cairo in 1973. He published his first book Heirs of Tolstoy on Kosnitsky Bridge in 2015 – a portrait of the contemporary Russian literary scene in Arabic. His translation of Nobel Laureate Svetlana Alexievich’s Chernobyl Prayer (2016) gained instant success and became a bestseller. He studied English language and literature at Ain Shams University and Russian language and literature at Ruden University in Moscow (Patrice Lumumba).