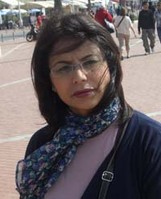 was born in 1964 in Sale, Morocco. She has two collections of short stories: Mallathi naf-alahu? [What Do We Do?], published by the Moroccan Union of Writers when she won their Award for Best Young Writer of 1992. Her second collection, Munthu Tilka al-Hayat (Since that life) was published by the Moroccan Ministry of Culture in 2005. Many of her short stories have been translated into French, German, Spanish, Italian, and Hebrew, and have appeared in several anthologies.