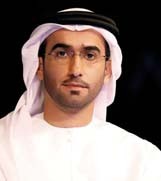 Sultan Al Ameemi is an Emirati writer born in Al Dhaid, the UAE, in 1974. He has published 19 books: 14 studies of popular culture in the UAE, three collections of short stories and two novels: P.O. Box 1003 (2014). and One Room Is Not Enough (2016) which was longlisted for the 2017 IPAF. For the past seven seasons, he has been a judge of the AUAE’s Million's Poet contest. In 2014, he took part in the IPAF Nadwa for talented young writers , where he began work on One Room Is Not Enough. He is currently director of the Abu Dhabi Arabic Poetry Academy and writes a weekly column on cultural matters in the Al-Emarat Al-Youm newspaper.