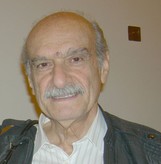 Shimon Ballas was born in 1930 in Baghdad into a middle-class Iraqi Jewish family in the vibrant neighbourhood of Al-Bataween. He began writing in Arabic from a young age in Iraq. In 1946, he joined the Iraqi Communist Party, after reading a French translation of Jack London's The Iron Heel.

He immigrated to Israel in 1951 and continued writing in Arabic during his first decade there (mainly in the Communist newspapers) before gradually moving into writing in Hebrew during the 1960. Immigration had dramatic consequences on his life, radically changing his social and cultural landscape. Confronted with new political and social realities, the question of language and literary writing echoed ideological questions more than ever. Among the Israeli cultural and political elite, Arabic was marked as inferior culture and the language of the enemy. Ballas, like other Iraqi Jewish writers, was faced with a dilemma – to keep writing in Arabic or to switch to writing in Hebrew.

Interviewed in 1991 during the First Gulf War. Shimon Ballas said: “I have never denied my Arab origins or the Arabic language, despite also having had a French education. The Arab identity has always been a part of me. And I have said and I say: I am an Arab who has taken up an Israeli identity, but I am no less an Arab than any other Arab. That’s a fact, and I have nothing to be ashamed of about it. If Arabs are perceived as being inferior, then it seems as if I am doing this as a provocation. But there are Arab Jews, just as there are French Jews: How come a Christian can be an Arab but a Jew cannot? Why should it arouse such amazement, then, when I say that I am an Arab Jew? I am always told that I am Iraqi. Where is Iraq – on the moon?”

Throughout his many years of literary activity in Hebrew and Arabic, Ballas published more than ten novels, several story collections, children's books, and memoir. His works of fiction included the unique chronicle of Iraqi history, V'hu Aher (Outcast), excerpted in Banipal  21 (2004), in addition to several important studies on contemporary Arabic literature, and numerous translations from Arabic.  The full novel Outcast was published in English in 2007, translated from the Hebrew by Ammiel Alcalay and Oz Shelach.

He played a pivotal role in the development of the field of Arabic to Hebrew translation in Israel during the 1960s and 1970s and was a pioneer in translating Palestinian literature into Hebrew. His important study, Arab Literature Under the Shadow of War, which had begun as his doctoral thesis at the Sorbonne, appeared in 1978 with a French translation coming out in 1980. His critical works in Arabic include Secular Trends in Arabic Literature (al-Kamel Verlag, Cologne, Germany).

Shimon Ballas was Professor of Arabic Literature at Haifa University. He often spent part of each year in Paris, where he would do most of his writing, having earned his PhD there when he studied at the Sorbonne.

Shimon considered himself “an Arab writer in exile” and is remembered as “the spiritual forefather of the Mizrahi Left” and “the Iraqi Jewish outsider”. Banipal 69 (Autum/Winter 2020),  included special tributes to Shimon Ballas with an article by Yehouda Shenhav-Shahrabani entitled "Goodby Shimon Ballas – Farewell to an Arab Jew", and by Elias Khoury entitled: "The Iraqi Jewish Outsider".

Further information about Ballas's works from Encyclopaedia.com includes the following:

Shimon Ballas's first Hebrew novel, Ha-Ma'abarah (The Transit Camp, 1964), is one of the first Hebrew novels to shed light on the harsh realities, tensions, and struggle for power in an immigrant settlement in Israel of the 1950s. This realistically narrated story was followed by novels and collections of stories. Among these are Ḥoref Aḥaron ("Last Winter," 1984), relating the experiences of a founding member of the Egyptian Communist Party who lives as an exile in Paris; Ve-Hu Aḥer (And He is Different, 1991, published in Engish as Outcast), depicting the fate of three protagonists in Iraq under a ruthless tyrant: the dictator's historian, a Jew who converted to Islam; a Communist; and an Arab-Jewish poet who later emigrates to Israel. The novel Solo (1998), set in Paris during the notorious Dreyfus affair, is the story of an Egyptian-Jewish dramatist who fights for the independence of his homeland.

Among his other prose works are the novels Lo bi-Mekomah ("Not in Her Place," 1994) and Tel Aviv Mizraḥ (Tel Aviv East, 2003). The collections of stories include among others Mul ha-Ḥomah (Facing the Wall, 1969) and Otot Setav (Signs of Autumn, 1992). The stories in the latter collection are set – typically for Ballas – in Baghdad, Paris, and Tel Aviv: "Aya" tells of a Moslem nanny bidding farewell to the Jewish family for which she had worked; "Otot Setav" focuses on the complex identity of an old Egyptian intellectual torn between cultures. Ballas consciously abstains from Oriental exoticism and nostalgia. An English translation of "The Shoes of Tanboury" appeared in 1970.

His autobiography, B'Guf RIshon, was published in 2009.