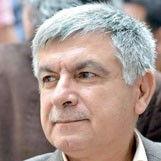 Saad Mohammed Raheem is an Iraqi writer, born in Diyala province, Eastern Iraq in 1957. He has worked as a teacher and journalist and his articles have been published in Iraqi and Arab newspapers and periodicals.

He is the author of six collections of short stories, a number of political and literary studies and three novels: Twilight of the Wader (2000), which won the 2000 Iraqi Creativity Award for Fiction, The Song of a Woman, Twilight of the Sea (2012) and The Bookseller's Murder (2016), which is shortlisted for the 20117 IPAF prize, and is excerpted in Banipal 58.

In 2005, he won the Iraqi Award for Best Investigative Journalism for that year, and was also awarded the 2010 Creativity Prize for the Short Story, for his collection Almond Blossom (2009).