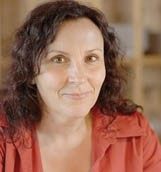 Kathleen Vereecken is a freelance journalist, born in 1962 in Belgium, who is known for her fiction and nonfiction writing for children and young adults. She made her debut in 1993. Since her fourth book she has written mostly historical youth novels. Vereecken paints a convincing and almost sensorial portrait of the age, embedded in a meticulous structure that keeps the reader engaged. Her work has been translated into French, German, Italian, Korean and other languages.

Hair is her first novel for adults and it is excerpted in Banipal 57 as part of the guest language feature LITERATURE FROM FLANDERS.