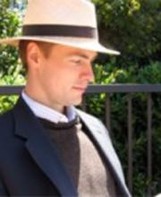 Luke Leafgren is an Assistant Dean of Harvard College and teaaches Arabic at Harvard University, where he received his PhD in Comparative Literature in 2012. He has translated the debut novel The Baghdad Clock by Shahad Al Rawi (2018), two of Mushin al-Ramli’s novels, Dates on my Fingers (2014) and The President’s Gardens (2017, excerpted in Banipal 57 in 2016) and Oh Salaam! by Najwa Barakat.