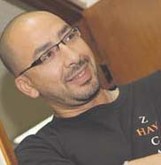 Yasser Abdel Hafez is an Egyptian novelist and journalist, born in Cairo in 1969. He graduated in law from Ain Shams University, Cairo. He started work as a journalist when he was 18, and has worked with Cairo’s Akhbar al-Adab weekly literary journal since it started. His first novel On the Occasion of Life, published in 2005, was excerpted in Banipal 25 – New Writing in Egypt, in Spring 2006.

His second, Kitab al-Aman was published in 2013. Its English translation by Robin Moger, entitled The Book of Safety, published by Hoopoe Fiction, was shortlisted for the 2017 Saif Ghobash Banipal Prize for Arabic Literary Translation, the first year the prize introduced a shortlist.