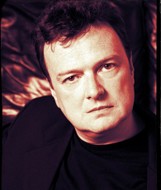 Frank Wynne is a multi-award-winning literary translator from French and Italian, who discovered a passion for languages when he moved from his native Ireland to France in 1984.

In 2012, he was made an Honorary Member of the Irish Translators’ and Interpreters’ Association.

For more on Frank Wynne, literary translator, writer and "terribleman", click here for his own site or here.