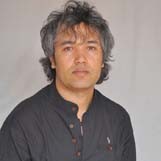 Ismail Ghazali is a Moroccan novelist and short story writer, born in the Amazigh village of M'Rirt, Morocco, in 1977. He holds a BA in Arabic Literature and works in the media.

He has published in Arabic two novels: The Murmuring (2001) and The Season of Pike Fishing (2013), with the latter being longlisted for the 2014 International Prize for Arabic Fiction; two novellas Purl of Dreams and Creak of Nightmares (2012), as well as six volumes of short stories. His book Boustan al-ghazal al-Muraqaat (Orchard of the Spotted Deer), which is a compilation of four of his short story collections, was shortlisted for the Moroccan Book Prize in 2012. His story "The Japanese Garden" was published in Banipal 54 – Echoes, translated by Sophia Vasalou.