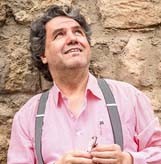 Amin Zaoui is a novelist, born in 1956 in Bab el-Assa, Algeria, writing in both Arabic and French. He teaches literature at the University of Algiers and is a former director of the National Library in Algiers.

He has written six novels, including La Razzia (1999), Festin de mensonges (2007), La Chambre de la vierge impure (2009) and Le dernier Juif de Tamentit (2012), excerpted in Banipal 54. His works have been translated into several languages, but the single publication in English till now is Banquet of Lies, translated by Frank Wynne (Marion Boyars, 2008).