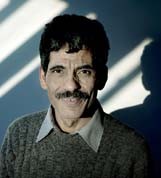 Mansur Rajih is a Yemeni poet and political activist for human rights, born in Yemen in 1958. He was President of the Yemeni Students’ Union and an active human rights campaigner when he was arrested in 1983. He was imprisoned and sentenced to death on false charges of murder, spending 15 years in jail. After long and persistent international pressure and major campaigns on his behalf by among others Amnesty International and PEN International, he was released in 1998 and was flown directly to Stavanger, the city of refuge for persecuted writers in Norway, where he has settled with his family. He has published several collections of poetry both in Norway and in Yemen, and is active in defense of freedom of expression and human rights.