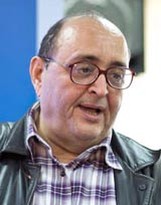 Ahmed Alfaitouri established the cultural page of al-Fajr al-Jadid (New Dawn) newspaper in 1976 (Cultural Horizons – Writings of Young Authors), and then became editor-in-chief of The Cultural Week, the first weekly Arab newspaper specialising in culture. He spent ten years (1978-1988) as a political prisoner; whilst in prison, he produced al-Nawafir magazine, written by all the inmates on cigarette papers and produced as a single copy. He has published six books including novels, a play and a number of critical works and is the owner and editor-in-chief of al-Mayadin, a Benghazi weekly newspaper.