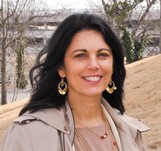 Paula Haydar is Professor of Arabic at the University of Arkansas. She holds a PhD in Comparative Literature and an MFA degree in Literary Translation.

Her translation of Lebanese novelist Jabbour Douaihy's June Rain (Bloomsbury Qatar Foundation Publishing), which in its original Arabic was shortlisted for the 2008 International Prize for Arabic Fiction, is the highly commended runner-up of the 2014 Saif Ghobash Banipal Prize for Arabic Literary Translation and also made the Beirut Daily Star's year end book review list of the six Top Middle East Novels of 2014.

She has translated six other novels by contemporary Lebanese novelists: three by Elias Khoury - Gates of the City and The Journey of Little Gandhi (University of Minnesota Press), and The Kingdom of Strangers (University of Arkansas Press), the latter winning the 1996 Arkansas Arabic Manuscript Translation Award, and three by Rashid al-Daif – This Side of Innocence and Learning English (with co-translator Adnan Haydar) (Interlink, 2001 and 2007 respectively), and the third in 2014 with co-translator of Nadine Sinno, Who's Afraid of Meryl Streep? (University of Texas Press).

Her translations of novels by Palestinian writers include Sahar Khalifeh's The End of Spring (Interlink, 2008) and Adania Shibli's Touch (Clockroot, 2014). The latter was awarded the Young Writer's Award – Palestine by the A.M. Qattan Foundation in its original version, and in translation made the longlist of the 2011 Best Translated Book Awards at the University of Rochester's Three Percent.

In addition, Haydar has translated a number of short stories and poems that have appeared in international and national journals. She also holds a B.S. in Physics with a minor in Arabic and an M.Ed. in Secondary Level Physics Education and teacher certification in Physics and Maths, and has taught Arabic, Physics and Maths in the USA and the Middle East.