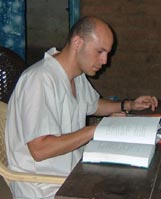 is a Palestinian American poet, a practising physician and poetry translator. He was born in Austin, Texas, on 1 January 1971 and grew up in Libya and Saudia Arabia, returning to the US for college and medical training in internal medicine at the University of Texas Medical Center in Houston, where he lives and works today.

He is the winner of the 2008 Saif Ghobash – Banipal Prize for Arabic Literary Translation for his translation of poetry by Mahmoud Darwish collected in The Butterfly’s Burden, published in a bilingual edition by Bloodaxe Books in the UK and by Copper Canyon Press in the US. The US edition was short-listed for PEN America’s poetry in translation award earlier this year.

On hearing the news of the judges’ decision, he said: “I am stunned with joy. I had no idea that I was up for the translation prize. Translating Darwish’s poetry was a dream of beauty, of art, with the glimmer that art will lead to cultural and mutual respect among peoples and in making the translations I focused as much on the strange in the poems as on the familiar and the universal.

"I was overjoyed, partly because it is high time for Arabic poetry to receive its due, particularly in the English language where further dialogue is opening up regarding art and culture. I hope this prize will help to ameliorate somewhat the over-contexualisation of the Arab poet and the Arabic language when an English reader encounters such work."

His own poetry, written in English, has appeared in Crab Orchard Review, Puerto del Sol, New Delta Review and Banipal, among others. He was awarded the River City prize in 2004 and his first poetry collection, The Earth in the Attic, has received the 2008 Yale Series for Younger Poets award, judged by Louise Glück.

His most recent translations of Mahmoud Darwish’s lyric epics, If I Were Another, is published by FSG