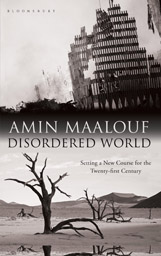 Translated from the French by George Miller

Amin Maalouf’s latest book, Disordered  World, has been a long time coming: twenty-six years in fact, its earliest seeds having been sown in the concluding pages of his now canonical The Crusades through Arab Eyes (1983). In that factual – but beautifully lyrical – narrative of the European invasions of Levant in the 11th and 12th centuries, Maalouf had managed the task of allowing Occidental and Oriental readers alike to visualise how that aggression had since determined nearly all exchanges between the two worlds – and how it was “deeply felt by Arabs, even today, as an act of rape”. Yet as he neared the end of his epilogue, Maalouf was evidently aware he would probably be returning to this subject before too long. However, I personally doubt that Maalouf – or anyone else for that matter – would have imagined that by the time the Franco-Lebanese author returned to pick up this thread, the Middle East would have once again been subjected to what in numerous quarters has been described as yet another crusade, one that has claimed an ever increasing number of lives ever since. What is perhaps more distressing is that the questions Maalouf raises, as well as the “scarcely altered terms” which he defines, are still far removed from anything approaching a satisfactory answer, which explains why Maalouf begins his preface of Disordered World with “We have embarked on a new century without a compass”.

This confusion is made evident by the number of topics Maalouf attempts to tackle in what is essentially too short a book. Over the course of three, vaguely titled chapters – “Hollow Victories”, “Lost Legitimacy” and “Imaginary Certainties” – the reader is brought to bear with no less than: the end of the Cold War, the rise of violent political Islamism, the failure of the Left, “the reduction of the West’s share of the global economy”, the interventionist militarism of the past twenty years, the identity crisis of immigrant communities in Europe, the organizational differences between the Catholic Church and the Muslim clergy, global warming and a host of other ancillary subjects. It is not that this kind of breadth is undesirable – quite the contrary – but that Disordered World attempts the unlikely fusion of narrative, reflection (and innumerable sidebars) without the overarching structure that such themes inevitably require, and which was one of the greatest strengths of The Crusades Through Arab Eyes. And though Disordered World, like every other book Maalouf has written, is eminently readable and fluent, the “compass” that Maalouf diagnoses as missing, is still nowhere to be seen by the end of it.

After all, one can’t help but be disappointed by the cursory glances that Maalouf’s new book casts on certain events – for instance, the Arab world’s jettisoning of its pluralist heritage, the disappearance of its Jewish communities, or the death of cosmopolitan Alexandria, which effectively “caused the end of a fruitful, centuries-old coexistence between countless Mediterranean communities”, all of which are given short shrift. Maalouf mourns them in passing, but does not delve further, which is surprising considering how he continually depicts himself as a product of two cultures. Instead, what Maalouf excels at is articulating the almost inexpressible anger and frustration felt by the Arabs over the course of their recent (and not too recent) history: a history which until the brief euphoria that materialized in the wake of Gamal Abdel Nasser’s early victories in the 1950s, has been marked by “defeats, foreign occupations, unfair treaties, capitulation, humiliation and the shame of having sunk so low after having conquered half the world.” This is Disordered World’s genius: that despite the countless titles currently in print which attempt to analyse the motivations behind would-be jihadists, I have yet to come across a passage as concise and revealing as this:

Every Arab carries within him the soul of a fallen hero, and the desire for revenge on all those who have treated him with contempt. If he is promised revenge, he listens with a combination of expectation and incredulity. If he is offered revenge, even in part, even in a symbolic form, he gets carried away. Nasser had asked his brothers to raise their heads.

While little of this will surprise the well-informed reader, what makes this treatise-cum-summary of recent world events so appealing is Maalouf’s fine writing. He has a knack for distilling complex thoughts into gems such as:

In my view, it is the absence of a papal-style institution capable of drawing a line between the political and religious which explains the drift that affects the Muslim world, rather than a “divine directive” creating confusions between the two spheres.

That said, Maalouf again falls short, simply by virtue of raising a fascinating question, making a couple of historical references – reminding his readers of how the papacy successfully quashed such fanatics as Savonarola – but eventually losing patience with it all (his take on this topic lasts a mere eight pages), before moving on to a new, more pressing topic. But if Disordered World loses points on the rigour of its argument, it gains them with its ethos. I for one do not agree with the blurb on the front cover of the book; Maalouf is not “the clear, cogent and persuasive voice from the Arab world that the West has been waiting for”. He is far too universal for that. Rather, he is a pioneer of the new global citizen that will in the future cease to be an exotic anomaly, but become more commonplace than many are for the moment willing to concede; take the following:

What I don’t like about the contemporary Arab world is its poverty of moral conscience, and what I don’t like about the West is its propensity to turn its moral conscience into an instrument of  domination. These are two very serious charges and they are doubly painful for me, but I cannot leave unspoken in a book which claims to tackle the sources of our imminent decline.

Examples of this sort appear on nearly every page – and though it may seem repetitive to do so, I get the impression that Maalouf is not so much establishing his credentials as emphasizing how the topics which he deals with have very little to do with cultures or nations (or even empires) any more, but have become a universal question of survival, and in a sense, the only question worth pondering. And this is why, despite the faults outlined, there is no better emissary of this stark truth at the moment than Maalouf.

Alas, unlike with The Crusades Through Arab Eyes, the concluding chapters of Disordered World are something of a let down. Maalouf bizarrely devotes ten rather histrionic pages to the topic of global warming, which – not to detract from the urgency of the issue – are written in the style of a rushed editorial and seem out of synch with the rest of the book. This is a shame, as Maalouf has obviously pondered over all of this for a while; the bibliography he includes is both tasteful, takes account of a large spectrum of opposing opinions, and is an excellent starting point for those interested in reading further. And while Disordered World might have benefited from some stronger editing, this is perhaps a case of the specialist reader being infuriated by a book that is clearly meant to inform and entertain the more general reader.

Indeed, Disordered World is no What Is To Be Done?, and neither should it be. As Maalouf writes in the preface (especially penned for the English edition), he stresses how he is determinedly wary of guess-work, however educated: in the case of whether Egypt will be able “to construct a stable democracy, catch up in the field of education, define the place of religion in public life, manage relations between different communities, and give women full rights”, Maalouf admits that it would be downright “presumptuous to make predictions. If there is a lesson to be drawn from the events of 2011, it is that the future does not allow itself to be contained within the limits of what is foreseeable, plausible or probable. And it is precisely for that reason that it contains hope.”

And though Disordered World is nowhere near as assiduously researched and convincing as The Crusades Through Arab Eyes, Maalouf is clearly as devoted to asking the right sort of questions as much as he is to answering them.