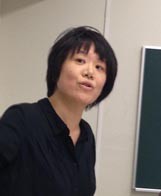 Aoe Tanami
A Dialogue with Arab Literature in Osaka and Tokyo

A Dialogue with Arab Literature in Osaka and Tokyo

Autumn is the best season in Japan for arts and literature. This year was no exception despite the exceptionally powerful typhoons and the volcanic eruption that caught the archipelago by surprise. On 14th October in Osaka University and 19th in Seikei University in west Tokyo, symposia entitled “Expression, Identity and Crossing Borders: A Dialogue with Arab Literature” were held with three visiting Arab authors – the Iraqi author and Banipal editor Samuel Shimon, the celebrated Lebanese-born author Rawi Hage from Canada, and the young Egyptian author Mona Prince. The events were inspired by the Asia Africa Latin America Literature Forum that has taken place annually in South Korea since 2010, and by the activities of Banipal over the years to broaden the readers of modern Arab literature around the world and encourage Arab writers and literary translators. It was not only as a co-ordinator of the symposia and a researcher in Middle East Studies, but also as a lover of literature that I enthusiastically embraced this opportunity to introduce modern Arab literature to the current Japanese book market, which seems hesitant to accept non-western literature, and especially Arab literature.

In Osaka (the day after the Typhoon Vongfong passed through), most of our audience were students studying Arabic and/or interested in the Arab world. Samuel Shimon fascinated the younger audience by talking about his dramatic life history, and introducing his work on Banipal magazine. Beginning with a reading from her novel ’inni uhaddithka li-tara (So You May See), Mona Prince talked about her personal relation with writing and her experience during the January 2011 Revolution in Egypt. Rawi Hage spoke about his three novels, his life as a child during the Lebanese Civil War, and later in USA and Canada as an immigrant, discussing the significance of writing fiction at all points as an individual and as an atheist.

With a sense of achievement, we left Osaka and travelled on to Tokyo, my home base. Here I want to add that these symposia were organized as part of a larger project, “Mahrajan (Festival) 2014”, which included other events with Mona Prince and Rawi Hage as well as with Mohammed Khashan from Palestine/Lebanon, who discussed his memoir – excerpted in Banipal 46 – plus a Palestine Poster Exhibition. “Mahrajan 2014” was made possible by the co-operation of local citizens, especially the residents of Koenji, an area of Tokyo.

After a special session on Mohammed Khashan’s oral history the previous day, the symposium at Seikei University had a wide-ranging audience of researchers, editors, publishers and the reading public. After opening with an address by the university president Yoichi Kamejima, and by the director of the Center for Asian Pacific Studies, Lee Chonghwa, I spoke of my hopes and expectations for the symposium and its aftermath. The lineup of the guests itself, I added, suggested the varieties of contemporary Arab literature that existed for Japanese readers, who generally had a limited image of it.

Samuel Shimon’s opening speech created a passionate atmosphere for the whole event. His introduction, which focused on his personal experience of reading Yusuf Idris and Naguib Mahfouz, and especially Taha Hussein, led the audience into this world of modern classics of Arab literature. After referring to his hardships after leaving Iraq, his meeting Arab writers in Paris, he read aloud of a few lines from his autobiographical novel Iraqi fi Paris (An Iraqi in Paris). Then he explained how the founding of Banipal magazine started a new epoch in the scene of contemporary Arab literature.

Mona Prince opened with the statement that it was difficult to be a liberal woman in Egypt. Looking back at her rebellious childhood, and to the growth of the Islamic movement in Egypt through many Egyptians returning from working in Saudi Arabia, she explained how she had broken one of Egypt’s taboos, namely sex, in writing a novel that criticized male domination in a sexual relationship. The reading she had selected from her novel supported this.

Focusing on the word “Identity” from the symposium’s title, Rawi Hage spoke about Arab identity: it is historically multicultural and as such contains minorities, and it exists as a result of compromise and the mix of many religions and cultures. In his first novel De Niro’s Game, which is an existential novel and a reaction to the religious aspect of the Lebanese Civil war, he described the aspiration for reconciliation among the people of Lebanon even though reality did not allow it. Then, introducing his second novel Cockroach, he suggested that the very act of narration released a person from his/her personal tragedy and formed the historical story that would then allow the reader to consider the manner of questioning itself.

The Seikei symposium included three prominent Japanese guest commentators. First, Kaoru Yamamoto, a specialist of Arabic literature, spoke about Arabic literature and its Japanese readers and recent efforts by Japanese researchers to introduce it more widely. Masakuni Ota, who has long experience as an editor, described the significance of cultural exchange between writers, looking back his experience of the Asian-African Writers’ Conference. Masatsugu Ono, a writer and a scholar of French literature, praised Samuel Shimon’s autobiographical novel in the highest terms, having read it in French translation, and recommended its translation into Japanese.

The over five hours of this rich and rewarding symposium flew past, and was filled throughout with excitement. I felt a profound joy at being a reader of Arab literature and being able to share my love for it with all the participants.

Back to Selections from Banipal 51 - Celebrating Saadi Youssef

Click to go back to Banipal 51 online contents page