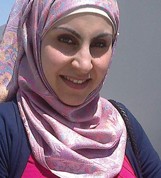 
“This scene reminds me of the day we travelled to France. Do you remember?”
“By God, stop your reminiscing. It infuriates me. Just think that we need to be home before sunset.”
I fell silent. I could imagine my frowning face. But I was not upset.
I was not bothered by my husband’s reaction, recalling his words to me as we neared Shafi Shamron checkpoint. Certainly he was annoyed because of the time we had lost, stuck between the twenty-one vehicles that were coming in our direction – we counted them to combat the aggravating boredom – and the eighteen vehicles that were coming in the opposite direction. Our son murmured the number of cars as he counted them, as we left that traffic jam – which is always capable of worsening.

Perhaps my husband was also distressed by the apathetic soldiers who did the pointless searching of our IDs and our suitcases, and perhaps he was even more agitated because the soldiers appeared close to us in age, him and me, or possibly younger.
And because he knows how much I love him, he tried to soften the edge of his words: “Don’t those damn people sleep? And why not, if their work is this relaxed, and they can smell the cooking of their wives from where they stand right here?”
I thought that he might be trying to raise my morale, or perhaps he wanted to bemoan the distance between where we live and his work, the reason that made us leave our home in Jenin and rent a home in Ramallah. Or perhaps he is still thinking about migrating.

Perhaps he is dreaming, like all Palestinians, of the day the Israeli settlers will leave our land, and their empty settlements on the West Bank will become ours. He once said to me jokingly: “I will choose a home in Beit El settlement, near Ramallah,for us to live in temporarily, or perhaps one in the settlement of Shafi Shamron so I could rest along the journey, or perhaps I would choose one at Doutan settlement, near Jenin.”
Then he asked: “Did Jihad fall asleep?”
He asks this as the exhalations of our son are as loud as whistles, breaking the silence of his mother, following the questions of his father.

Perhaps he wanted to apologize for his way of raising our son. Perhaps he wanted to say that he was worried for the child when he tugged at the trousers of the female soldier. “She could have killed him, that savage one; they kill without mercy, believe me!”
Perhaps he was waiting for me to reply with my usual statement: “Keep making the boy afraid of them, and let us see how we will liberate this land.”
He continued jokingly: “Perhaps Jihad liked her blond hair!”
I thought: perhaps he wanted to make me jealous, or perhaps he was waiting for me to respond with one of my confident replies: “Me jealous? And of who? A female soldier?”
Then he spoke, after long silence – perhaps he was thinking of what to say during that silence – “I am travelling to Cairo to attend a convention next month.”

I smiled: perhaps he wanted to remind me that he is an educated man, that he occupies a senior position, and that he is not happy with some of his actions sometimes. I gave him a sideways look..Perhaps I wanted to say to him at that moment: I love you.
And I know you are that way.
I remembered when we were both sixteen years old. We met in France on a trip with a private organization in order to meet other young people of various nationalities, to discuss our national concerns. We travelled through Lod airport, in Tel Aviv. We were young, and in an Israeli airport we stood out like lush green palm trees. We were persona non grata, unwelcome people, who are searched everywhere - even their eyes, their smells – for any traces of an orange or an olive that they might be accused of carrying.
I remembered the Jewish group that lived near our camp in the suburbs of Paris. We realized then that the locations of the camps were not coincidental, and that where we stayed had all been planned; the purpose of our travel was not only to discuss national concerns. So we made ourselves busy in spite of their efforts to mingle with us. We stayed away from their camp.

And I remembered Suzanna, the young Jewish woman who had Polish origins. I remembered the day I met her. It was a quiet morning; I could not sleep easily. So I went out for a walk, hardly believing that I was in this magical country.
I walked until I reached the end of the campsite. There I saw a girl gazing at the sky with love. I was encouraged and walked closer to her. It was Suzanna. She knew I was Muslim by my hijab. I knew that she was Jewish from the Star of David that she was wearing around her neck, like the rest of her group.
Suzanna spoke broken Arabic. She said that she had learned it in an education centre in Jerusalem, and she told me that she liked praying alone in nature. Her prayers, she said, reach out to God, whom she loves. She cannot find God at the Wailing Wall or through the prayers of her religion teacher.
She cherished Europeans for their freedom, and wished that she could find a way to fly to the Poland she did not know but adored like she adored God.

I got together with Suzanna every morning after that meeting. We would shake hands and stay together until breakfast time. We continued to share thoughts and dreams and confessions of love until the last day.
I looked at my husband’s face with his dark complexion that that blonde Suzanna found so attractive: Ah! if he knew that. What if he knew that!
I wondered: does Suzanna remember me now? What might have happened to her?
Perhaps she rebelled against her family and travelled to Poland. Perhaps she became a member of one of the organizations that call for peaceful co-existence. Perhaps she writes and demonstrates against her own government . . . and perhaps the tender, beautiful, dreamy Suzanna is standing at a checkpoint somewhere, like the blonde female soldier at the checkpoint who examined the numbers of our ID cards with apparent disgust.

Click to go back to Banipal 45 online contents page