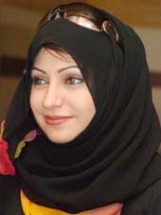 
No rest for house cats

She sent her little one out to play while staying close by, circling him affectionately. She stroked his smooth-furred back. She mewed with her broken voice and her tail danced. She shoved her head into the swelling folds of his belly with love, only able to hear its high gurgle.
She meditated . . .
Then she began with deep affection to lick his tail with her warm tongue. He rose from his sleep, vexed, splayed his claws and pushed her away, saying: “What did you leave for the street cats then?”
He went out of the house, fiercely slamming the door behind him and heading for the street.

It was a beautiful earring despite its humbleness. A crystal droplet in the shape of a tear. But neither its beauty nor its lightness was her main reason for loving it, for her being attached to it. That came from its being a gift from the man in her life she had loved most of all.
It was the stylist’s pulling on her hair with the brush that had dislodged the clasp from the pin behind. It had slowly rolled down her abaya and come to rest beside her chair. In the process, the hairdresser, off to make some coffee, had trodden on itcausing it to lodge, unfelt, in the sole of her trainer. She had then left the salon and hailed a taxi. On getting out she had scraped the bottom of her trainer on the car mat, depositing the earring to be left there for hours, until another customer, who had hailed the taxi to go to the airport, had noticed it.
He had been captivated by the earring and decided to keep it as a memento of his first trip to that beautiful country. Back home, his wife, having come across the earring in his office drawer, wouldn’t believe the taxi story. She imagined the girl he had slept with on his trip, the one who had left her earring on the pillow for him. He must’ve decided to keep it as a memento of that night. That earring was the cause of many a scene between the couple until, bringing matters to a head, she threw it down a drain so as to rob him of it forever.
To this day, its original owner, every time she goes to the salon where she lost it, assails the staff with questions about that crystal earring of hers, the one made in the shape of a tear.


The tap and the sink

The tap said to the sink:
“What a petty job you’ve got, holding water in your basin then letting it out.”
The sink replied angrily:
“So you think people would try washing from you without me? Your little trickle would leave everything dirty.”
The tap laughed sarcastically and said: “How stupid are you? Don’t you realise how much you depend on me? You’re nothing without me.”
“How arrogant you are! You need me as much as I need you.”
Then the tap, fuming with rage, turned its head twice till you could hear its thread crack and said: “Now you’ll realise what you are without me.”
In the days that followed, people steered clear of the sink when they found out the tap didn’t work. Some even kicked it in anger. After a week a man came with a metal box full of tools. He sized up the situation, worked on it for an hour and then dropped the arrogant tap into the dark of his metal box. The sink, though, remained where it was and people flocked to try out its new tap.

The boy’s eyes widened when he saw the trunk for the first time. It was only because of a promise to fix his watch that his grandfather he had taken his old tools out of the trunk, that he had hidden away. The little boy’s hand plunged into it but found nothing until he finally grasped something at the bottom.
He gasped and pointed: “What’s that, granddad?”
“We call it a pocket watch,” replied his grandfather. “Your great-grandfather brought this back from his first visit to England.”
He opened the lid of the round, engraved case. Within it nestled a watch.
“Give me that one and take my watch, granddad,” the boy pleaded insistently.
The grandfather laughed: “It’d be no good to you, my lad. It doesn’t work and there’s no hope of fixing it.”
“So why do you keep it then, granddad?”
* * *
That evening, he slipped gently into his bed, trying not to wake his wife who appeared, from the loudness of her snoring, to be deep in sleep. He lay there, repeating to himself the answer he’d given to the boy’s question: “There are some things we can’t use any more but we just don’t have the strength to get rid of them.”