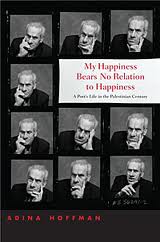 Adina Hoffman will discuss My Happiness Bears No Relation to Happiness: A Poet's Life in the Palestinian Century (Yale University Press, 2009), her biography of the late Palestinian poet Taha Muhammad Ali (1931-2011). The work documents the painful loss of Taha's childhood village, Saffuriyya, which was bombed in 1948, forcing him to flee by foot to Lebanon. He returned to Nazereth the following year where he lived for the rest of his life. His efforts to rebuild a new life far from his scattered family are relayed alongside the development of his literary works.

Taha Muhammad Ali started publishing poetry in the early ’40s. In the 1950s and 1960s, he sold souvenirs during the day to Christian pilgrims and studied poetry at night. Self taught, his formal education ended after fourth grade.A collection of his work in English translation (with facing Arabic), So What: New & Selected Poems, 1971–2005, translated by Peter Cole, Yahya Hijazi, and Gabriel Levin, was published by Copper Canyon Press in 2006.

Taha contributed three poems to Banipal No. 2, translated by Anton Shammas, the well-known Palestinian author of Arabesques, written in Hebrew. Banipal issue No. 2, 1998

To find out more about Taha Muhammad Ali, click here.

Adina Hoffman is an American essayist, critic, and literary biographer. Her works include House of Windows: Portraits from a Jerusalem Neighborhood (Steerforth Press, 2000), My Happiness Bears No Relation to Happiness: A Poet's Life in the Palestinian Century and Sacred Trash: The Lost and Found World of the Cairo Geniza (with Peter Cole, Schocken Books, 2011). Her work has been described as,  “A triumph of personal empathy and historical insight, and a beacon for anyone who knows that ‘more joins than separates us.’” Boyd Tonkin, The Independent.