Posters throughout the city urged people to “Visit the World of Reading” – and they did just that. Many enjoyed the stimulating series of panel discussions with authors and translators, publishers, agents and distributors. The new annual Sheikh Zayed Book Awards were presented by General Sheikh Mohammad bin Zayed Al Nahyan, Abu Dhabi’s Crown Prince.

The Children's section of the book fair was crowded every day with children eager to participate in the story-telling, the competitions, the drawing and numerous other daily events 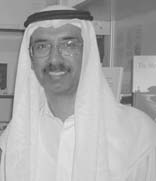 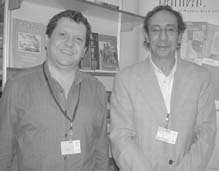 Among the visitors to Banipal’s stand at the Fair were Emirates author Mohammad al-Murr (left), and later, Lebanese poet Abdo Wazen and Mohammed Hashim (right), director of the Egyptian literary publishing house Merit 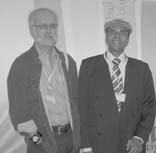 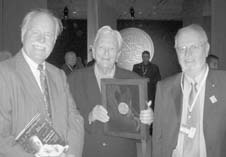 AUC Press director Mark Linz, Denys Johnson-Davies, holding his Sheikh Zayed Award for Personality of the Year in the Field of Culture, and Peter Ripken, director of the Book Fair’s International Discussion Forum

Banipal’s editor with Algerian novelist Wacini Laradj, who was awarded the Sheikh Zayed Prize for Literature