The panel brought together a wealth of knowledge from practictioners in the field – from the USA, Germany, Poland and the United Kingdom.

Albrecht Lempp developed and implemented a new system of integrated services for the promotion of Polish literature, designed to facilitate access for foreign publishers, journalists, and organizers of literary events, when Poland was the Guest of Honour at the 2000 Frankfurt Book Fair. The system provided easy access to all relevant information about contemporary writers, their work, publishing houses, rights, available translations. It could be fruitfully replicated in other countries. 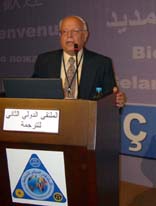 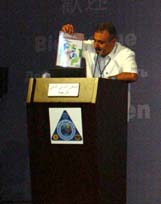 Salih J Altoma, Emeritus Professor of Indiana University has investigated and compiled bibliographies of translations from Arabic into English over many years, and argued that developing dialogue through translation necessitated studying not only what had been translated thus far from modern Arabic literature, but also the extent of its accessibility to general readers in the target language, as well as how Arabic works in translation were being reviewed or appreciated by readers.

Samuel Shimon spoke of Banipal’s unique experience in literary translation with over 28 issues of the magazines, and how the project had necessarily expanded to include readings, tours, consultancies, book publishing and book fairs.

Peter Ripken, as Director of the Society for the Promotion of African, Asian and Latin American literature and of the Frankfurt Book Fair’s International Centre, was in an unparalleled position to give an overview of developments. He urged people to listen to what the Arab world had to say. “And here, he added, “the voices of poets, storytellers and novelists are much more important than the statements by presidents, ministers and diplomats.”