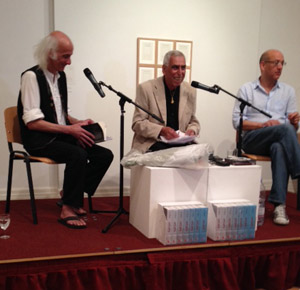 The London launch of Saadi Youssef's Collected Poetical Works (pictured on the stage above in front of Saadi Youssef) was a great occasion that also celebrated the poet’s 80th year. Omar al-Qattan opened the evening, talking with Saadi Youssef about his childhood, his exilic life and living in London. The reading of poems in Arabic and English translation began with Saadi Youssef and British poet Stephen Watts reading “The Vision”, which starts prophetically:

This Iraq will reach the ends of the graveyard.
It will bury its sons in open country
generation after generation . . .

They continued reading, alternating with different poems in Arabic, and in English translation from Saadi Youssef’s two English collections.

The event was filmed by both the Mosaic Rooms and Levant TV, so those who missed the event will soon be able to catch up on this unique gathering to celebrate Iraq’s greatest living poet, Saadi Youssef.

Saadi Youssef was born in Iraq and is considered one of the most important contemporary poets in the Arab world. Following his experience as a political prisoner in Iraq, he has spent most of his life in exile, working as a journalist throughout North Africa and the Middle East. On receiving copies of his Collected Poetical Works, a mammoth 7-volume box set spanning 62 years of poetic output, from his publisher Dar al-Jamal, in Beirut, he said:

‎“The seven volumes of my poetical works contain what I have written between ‎‎1952 and 2014. They represent a life’s journey that is rich in hope, dangers and ‎departures and is also a journey on the long road of art. Whosoever is interested in the ‎aesthetics of contemporary Arabic poetry can trace my many steps in these ‎volumes.‎ It has been my good fortune to have lived a long life, to experiment ceaselessly ‎and to continue doing so until now. Residing in London has accorded me support and a home. It has given me ‎years of abundant output, tranquillity and experiences in life and art. I will remain indebted to this ‎country that has granted me peace and safety.”‎