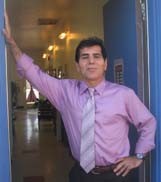 Kadhim Al-Hallaq, pen name of Kadhim Joni Mahdi, was born in Basra, Iraq. A fiction writer, he was jailed in 1991 for speaking against the government and jailed again in 1994 for his involvement with a literary group. On release from prison, he fled via Jordan and Saudi Arabia to the United States where he was granted refugee status.

He now lives in Phoenix, Arizona and supports himself as a barber while trying to finish a novel.  In 2000 he received the Hellman-Hammett Grant, awarded to writers persecuted in their home countries