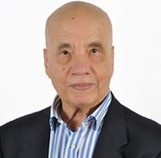 Abdelrashid Mahmoudi is an Egyptian short-story writer, poet, critic, translator, who worked for UNESCO for 20 years. He has a degree in philosophy from Cairo University and a PhD in Middle Eastern Studies from the University of Manchester, England. He has a highly regarded book on the great Egyptian writer and intellectual Taha Hussein, From Al-Azhar to the Sorbonne (Curzon Press, 1998), which was reviewed in Banipal 4 (Spring 1999).

In 2014 he won the Sheikh Zayed Book Award for his novel After Coffee, which is reviewed by Susannah Tarbush in Banipal 62 (Summer 2018).